I first met Denise Hoyle in 2003 when I bought some of her decorative tinselled cards. I wanted to sell them in the shop so I sought her out, discovering that she was a near neighbour. She invited me to her house where she showed me an amazing quantity of ceramics and watercolours that she had made in an evening class whilst she stayed at home looking after her children. Denise was married to the British artist Walter Hoyle and they lived near Great Bardfield in Essex, also home to Edward Bawden and other well known British artists who created an artistic community. Later, I held another exhibition of her work in Hastings and the many ceramics were snapped up by admirers of her work including the artist Rob Ryan.

Denise came to England from Paris in 1954 to work as an au pair for a young boy Fairless, his parents Standish and Dodie Masterman lived in a large white stuccoed house on Regents Park. Dodie, an artist and illustrator and once Vogue model had a passion for the imagery of the toy theatre, and was a good friend of Marguerite Fawdry. Marguerite had started Pollocks Toy Museum in London, and then became one of the first tenants of the newly-restored Covent Garden Market with Benjamin Pollocks Toyshop 40 years ago. Denise had always had a love of the Commedia dell ‘Arte and the ballet and as a young woman growing up in the 12th arrondissement she would spend her days dreaming up imaginary costumes for the Théâtre du Châtelet. Imagine her delight as a 19 year old she ended up in a house full the English version, Pollock’s characters, all coloured and tinselled.

Over 60 years later Denise still paints the Harlequin and Columbine characters. Her ceramics have been sold in the V&A shop and her delicate watercolours of flowers and fruit are held at the Fry Art Gallery. A recent book of her colourful collaged pictures ‘An artist at her kitchen table’ by Emma Mason has just been published by Bread and Butter Press.

To accompany our Harlequinade podcast, we have produced a limited edition folder containing ‘Pollockry’ [the phrase coined by aficionados and collectors of ephemera relating to Pollocks] which includes a delightful tinselled postcard hand drawn and coloured by Denise herself. 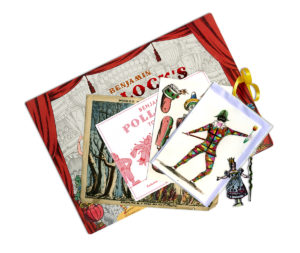