Artists and the need to play

Artists often tap into their inner child to make toys.

Picasso made a miniature theatre fashioned out of an empty Gauloises cigarette packet for his children Maya and Paulo, with tiny paper cut-out figures of commedia del’arte characters for them to perform on the dinky stage.

Many artists made playthings for their own children. Paul Klee made toys for his son including puppets made from found materials: a horseshoe, a nutshell, a matchbox, bones …. just like the earlier folk artists who fashioned things out of anything that came to hand.

Later in the 1960s, designer Fredun Shapur made toys for his children, and then he went on to design toys for Naef, Galt’s and the American company Creative Playthings. According to his daughter Mira, play lay at the heart of her father’s creative process.

We can trace the beginnings of good toy design to artists linked to the Bauhaus in Germany, who were educated in the Kindergarten tradition pioneered by Friedrich Fröbel. These artists were in touch with their own childhood experiences, appreciating the importance of toys, the learning environment, and good design – they were things to be explored and developed. (Braque, Mondrian, Kandinsky and Klee all went to kindergarten schools). They were fascinated by children’s art work – Picasso, Klee, Matisse, Kandinsky, Miro and Dubuffet, all had sizeable collections of artwork by children. At the beginning of the twentieth century, Expressionists, Cubists, Futurists would exhibit their work alongside the art of children. These artists believed that “childhood lies at the heart of the creative act”, and wanted to make their own new types of work based on a child’s vision of the world.

Ladislav Sutnar, the Czech-American graphic designer had started working with a puppet theatre for working class children – the puppets he designed being inspired by the Bauhaus. His wooden toys depicted the themes of modern everyday life in the big city – cars, planes and trains – and he won recognition for his construction sets. In 1939, Sutnar was in New York for the World’s Fair but stayed in America and never returned to Czechoslovakia.

Joaquin Torres-Garcia was born in Paraguay. He was a painter, but gradually became interested in carving wooden toys. After spending time in Europe he went to New York in 1920 hoping to sell his toys, but with little success. One can still find the catalogue Aladdin Toys he produced and illustrated. Torres-Garcia returned to Italy leaving a friend in charge of the company, but in 1925 a fire destroyed the factory. As he had four children one would like to imagine that they might have helped their father painting his characterful creations.

Although the wooden toys of these early twentieth century artists have influenced later designers – Charles and Ray Eames, toy manufacturers Paul and Marjorie Abbatt (their friend Erno Goldfinger designed some finely crafted wooden aeroplanes, trains and barges for them), Ken Garland of Galt Toys, Kurt Naef the Swiss furniture maker who reproduced some classic toys of Bauhaus designs, and Alexander Girard – they remain somewhat outside the mainstream for twenty first century children unless played with in the nursery school environment. Educationalists will continue to source the staple wooden blocks and tactile shapes to stimulate the imagination of small children.

Design shops can be found to stock Modernist toys from the great designers, but one suspects that adult collectors buy these for themselves as these toys tend to be expensive and are not easily discovered by general toy browsing. Many commercial toy manufacturers produce toys aimed to appeal directly to the child consumer who is lured in by the latest screen character.

Mid-Century toy companies and the vision for children’s development

The Abbatts’ philosophy was that toys should be functional in design as well as educational in play.

In the UK at the same time the Fawdry’s Toy Museum could be found in Monmouth Street, Tridias Toyshop was started in Bath by Robin and Charlotte Cooke in 1964. Tridias was the first shop in the UK to sell Sasha dolls – here there is a link to the Modernists as Sasha Morgenthaler was a protege of Paul Klee. A Swiss artist and toy-maker, her vision was to create sculptural dolls that reflected the innocence of children of all races and cultures.

So we have those people who love Pollock’s for the heritage, and are delighted to be introduced to the contemporary artists working within that tradition. And then – possibly the same people – those who seek out the Modernist toys from the great twentieth designers who put children and play at the heart of their work.

Hand carved wooden maypole dancers by zeel can be seen this summer on display at Benjamin Pollock’s Toyshop (pictured) and these ‘one off’ jig dolls can be purchased individually. Please enquire through the website or shop. Due to toy safety rules – handmade artists toys are NOT for children but are for collectors.

For children we have produced a Hansel and Gretel game created from the art by Clive Hicks-Jenkins for Benjamin Pollock’s Toyshop. 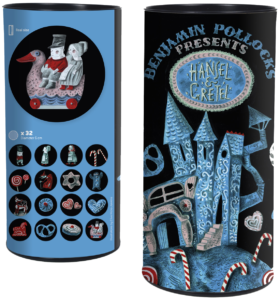