Here is a beguiling story I once read about Franz Kafka who in 1923, a year before his death, was walking through a park in Berlin when he across a small girl in a state of distress. The child was inconsolable as she had lost her favourite doll. Not missing a beat, Kafka immediately informed her he was actually in contact with the doll assuring her although she had loved her little owner, she had grown tired of living with the same family and decided to go off into the world alone! Being apprehensive, as most children are, the girl demanded proof and Kafka rising to the challenge went home returning the next day with a letter, he had laboured over all evening from the doll!

He continued to to do this over a few weeks, placating the child with a series of adventures (in doll time) including an engagement, wedding preparations, marriage and even finding a home. All events happily preventing a return to her former little owner. These letters are now lost, just as the doll at the centre of them was. Kafka, the child and those caught up in his beautiful act of consolation in the park are all lost to time and we will have to guess what was going through his imagination to put himself in line with the child’s first grieving process. And intriguingly –  how the sentiment he relayed in these letters would have been at conflict with his normally inconsolably, accusatory and self wounding correspondence with his own loved ones.

Simon Seddon, host of Holding Up the Queue, the podcast from Benjamin Pollock’s Toyshop

Simon, as well as being behind the counter in Benjamin Pollock’s Toyshop for over 10 years is an artist, illustrator of our shadow boxes and doll and toy collector. In episode 4 of Holding Up the Queue (a name he coined for the podcast) Simon talks to Eileen Lam of Dolly Treasures about the incident when the star of The Little Mischiefs, ‘Ted’ went missing Last Christmas. Horribly for us at Benjamin Pollock’s Toyshop, Ted vanished from his modelling stint by the famous Covent Garden Christmas tree and close to our shop in the famous market building. Eileen recalls her own very version of Kafka’s act of kindness to give her 80,000 instagram fans a happy ending to the Dolly Treasures Christmas story. 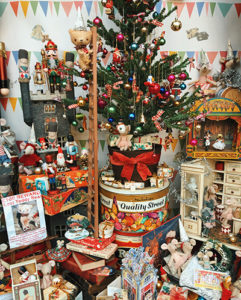