“To me it’s normal now, being out and about taking pictures, it looks really crazy but to me it’s perfectly normal. I guess I do express myself”

This is not a quote from luminary female photographer Cindy Sherman with a current retrospective at the National Portrait Gallery on until the 15th September, but the doll photographer Eileen Lam who became an internet sensation when she started her instagram account Dolly Treasures. When she left home Eileen’s daughter (fondly known as Dolly) encouraged her mothers creativity when they started to correspond through photographs. The photographic postcards developed into a daily story of The Little Mischiefs.

In episode 4 of Holding Up The Queue ‘A Doll went out into the world” we were intrigued to talk to Eileen about the role of the doll. Social media it seemed had opened up a whole world which could be considered niche and esoteric but actually has lots of fans who also find a way to express themselves creatively and instagram had democratised styling toys as an art form. If break dancing can make the 2024 Olympics, we think doll photography can make the V&A.

In fact this Autumn the V&A does host an exhibition ‘Wonderful Things’ by British fashion photographer Tim Walker who often used giant dolls as props and of course dolls and fashion are closely linked. He says in the introduction:

“My relationship to objects is like falling in love with someone. It relates to how we interact as people, how you become best friends with someone. It’s a search for a new friend…’

And I guess that’s the thing with dolls and doll photography, it’s finding a muse, and influencer and un-complicated friend or as a characters in the stories you want to tell, just as you do when playing as a child. Or as a type of ‘toy theatre’ where as the artist you get to be director. As Simon says in the podcast “it is very cinematic…I like to think of clicking channels of this lovely old television, in this lovely old room in your imagaination”

and online from Dolly Treasures

The Little Mischiefs by Dolly Treasures is suitable for children, we have picked out some of our favourite doll inspired photography books, films and instagram sites (although not all of them are intended for kids)

The highly influential Czech animator Jan Svanjkmajer creates a hallucinatory childhood world, that is often only experienced at that age. A stop animation version of Alice in Wonderland where Alice turns into a porcelain doll, the playing cards are toy theatre characters that have their paper heads chopped off by scissors and puppetry and toys combine to immerse one in a dreamlike visual fantasy.

Dare Wright, a fashion model, broadway actress turned doll photographer found her muse in a 1920s Lenci Doll. The black and white photographs chronicled the adventures of Edith and the bears (very grumpy teddy bears) through a series of children’s books beginning with The Lonely Doll in 1957

Arabella – A Story of a Doll

A personal childhood favourite, this photographic picture book from the 1970s tells the adventures of Arabella, a French porcelain  ‘Jumeau’ doll photographed by Jac Remise, a toy collector and inspiration behind The Golden Age of Toys, both books are now out of print but worth tracking down

A contemporary of Cindy Sherman (and forgive us Laurie but mother of famous daughter, writer and actress Lena Dunham) she has used miniatures, dolls and toys in her photography since the 1970s. One of my personal greatest buying regrets is a dollhouse she created, the  Kaleidoscope House from the early 2000s

A Room Full of of Toys

This 2006 book published by Thames & Hudson is written by Alberto Manguel and explores what toys mean to both children and adults – how toys can tell us who we are and allow us to imagine what we may become. Extraordinary photographic images by photographer Michel Pintado. Toys from the collection in the Musee des Art Decoratifs, Paris have been art directed by Jean Haas and brought to life in toy’s-eye view of more than a century of fun and games

All My Plastic Children

An instagram account by doll collectors and vintage lovers Madeleine and Malachi. Initially set up as a parody of social media family FOMO. The presently childless couple use their collection of plastic toddler dolls to document their life with a sense of humour about their collection.  They have heard all the ‘creepy doll’ comments but are comfortable in their niche hobby and using doll photography to express themselves  All my plastic children 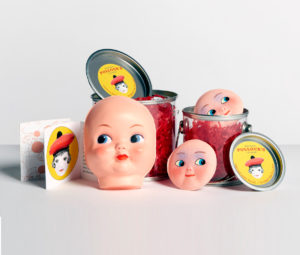