Writer and illustrator Brian Selznick talks to Simon about the art of piecing together a page turner and how children’s books can be a guide and friend in navigating life as a child. Brian’s black and white illustrations set the scene for the reader to dream in colour. His 2007 book ‘The Invention of Hugo Cabret’ was turned into a film about silent movie maestro Georges Méliès by Martin Scorcese.
Hugo and Billy Marvel, castaway protagonists are central to two of Brian’s award winning children’s books.  Billy in ‘The Marvels’ survives a shipwreck and later finds work in a London theatre. Hugo lives in the wall of a Paris station and has to unlock a mystery of a mechanical man and a penniless toy shop owner. These orphan heroes join Cinderella, Pip from Great Expectations, Lyra from His Dark Materials, Peter Pan, Alice, Max from Where the Wild Things Are and Harry Potter in the realm of great foundlings of children’s literature. Survivors, brave and bold children who find themselves in a world, absent of parents.
Weaving the themes of fragmentation, scraps and memories throughout their discussion Brian and Simon are joined by theatre designer Christopher Oram. HUTQ 5 is the first part of a double episode where both guests talk of their childhood influences and the importance of the childhood imagination in a creative career. 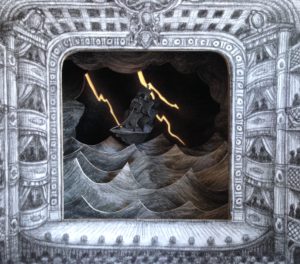