Hugo Cabret: ‘Maybe that’s why a broken machine always makes me a little sad, because it isn’t able to do what it was meant to do… Maybe it’s the same with people. If you lose your purpose… it’s like you’re broken.’ 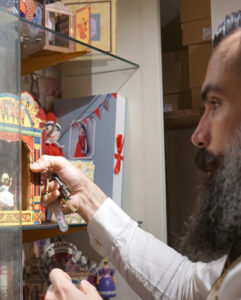 I’m a technician with a special interest in the very early days of motion pictures. When a call came from the office of Martin Scorsese’s The Invention of Hugo Cabret (working title), I wasn’t keen to be involved. I loved Brian Selznick’s book but I wasn’t too well. David Balfour (Props) was persuasive, and I did some consultancy online. A researcher came to see me, and I got a bit more drawn in. Another call from David – ‘Can you come to a meeting at the studio?’ They sent Mr Scorsese’s car for me – and now it was too late to escape.

Hugo was an orphan boy who lived inside a giant clock at a Paris train terminal c1930. He meets old-time film director Georges Méliès, who’s reduced to running a toyshop in the station.

In his time, Méliès had been a giant amongst film producers/directors/actors. A magician by trade, he’d embraced the potential of the new medium on the very day that Paris first saw motion pictures on a screen, the Lumière brothers’ preview in 1895. Buying a projector from England (which he converted into a camera) Méliès soon became a legend in the production of special-effect, féeire, and fantasy movies. His masterpiece is the iconic A Trip to the Moon (1902). Film styles changed; his studio closed in 1913. By the 1920s he was running his toy stall, until discovered by young cinéastes (film buffs) just in time for him to see his legacy universally acclaimed.

Hugo’s father had made an automaton – a clockwork boy, who could draw a picture, but damaged in a museum fire it wouldn’t work…..

I got to Shepperton and the meeting was a whirl. Three of us stood surrounded by giant drawings of the automaton and film sets, questions were fired: ‘Is there a component of an 1890s cine camera that could also be used in an automaton?’ There was – a Geneva Star. An assistant instantly Googled, printing out a description for David who handed it to me – it looked familiar, I had written it years earlier – and I nodded. It was adopted for that film sequence, and also for the logo on the children’s film history book.

In the giant ‘aircraft hangar’ props shed hundreds of feet of shelving held every French period object imaginable, from ornaments to fixtures and fittings – and of course, toys. Antique French toys, restored toys, replicas. Period photographs of Méliès’ toy stall survive, a real gift for the set designers and art director Dante Ferretti. In the movie you can see, of course, a Pollock’s Toy Theatre set amongst the push-alongs, dolls, and clockwork jouets.

But my job was preparing the cameras and projectors. Some real, some replicas made by skilled props technicians. Together with film tech Lester Dunton, I showed actor Michael Stuhlbarg how to put together, thread, and operate the portable 1920s Pathé film projector. He grasped it all first time. 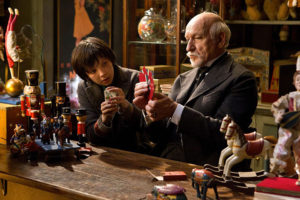 During breaks I wandered around the shelves, and once saw nine versions of the automaton boy on a table. Sadly, no cameras allowed. Preparations continued for a few days as snow started falling, and we moved to the full-size replica of Georges Méliès’ glasshouse film studio, built on the back field. Uncomfortable being a looker-on ‘adviser’ I put on a beanie hat and joined the grips, pushing carts and unloading gear – and getting shouted at when things were happening too slowly.

One evening I got a call from editor Thelma Schoonmaker. How did someone make a film splice (join) c.1900? I made a short video showing the process. I was called to the set, and found myself sitting at a table in the snow making film splices, a tech – who’d been taught from my video – standing by just in case. Then inside the set’s tiny editing room, wearing Ben Kingsley’s standby Georges Méliès suit in case the camera caught me. ‘I can make splices – saw my dad do it,’ said Sir Ben. But he was needed on the 2nd unit set.

Making it past the cutting room floor:

It was glacial, the power generator was buzzing and lamps blinking. Chemical hand warmers kept my fingers from freezing as I made splices and held up the film strip for the shot. (That’s my thumb in the movie, probably.)

The children, and all the other actors, were charming. Occasionally Mr Scorsese would walk over and ask a question about authenticity – not always easy to answer as the film is a fantasy. Highlights: The skeletons walking onto set; the giant fire-breathing dragon; burning the studio props; the Lumière filmshow in a fairground tent; walking through the extraordinary railway terminal; Georges and his wife watching the rediscovered colour version of A Trip to the Moon in their retirement apartment. I took my grandson to the Cast & Crew screening at Leicester Square, and was pleased and surprised to see that I got a screen credit. No photos, no IMDB listing, but so many special memories. 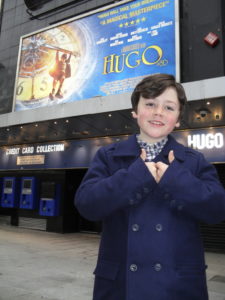