Working for an enterprise with such enthralling history behind it, I every so often find myself speculating how those heroes of the past felt whilst working through wars and personal tragedy. I try to transport myself to the mid-19th century, more accurately to 1851, as an attempt to imagine what it was like, when a very specific shop in East London opened its doors for the first time.

Whenever I explore the history of Benjamin Pollock’s Toyshop, I see it as a vivid theatrical work divided into dramatic acts.

Act 1. The Redingtons – the legend is born

John Redington was a particular individual who liked to be known as Printer, Bookbinder & Stationer who diversified as a  Tobacconist and Wholesaler. He was also the owner of the new Theatrical Print Warehouse located at 73, Hoxton Street in an underprivileged quarter of London. It is thought-provoking to look back and comprehend that its residents had undeniably no idea that they were witnessing the creation of a legend. 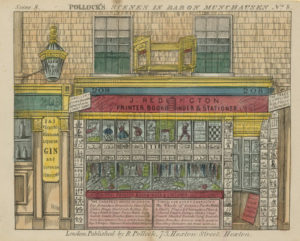 John Redington used to work as a representative for the toy theatre editor John Kilby Green. After his death in 1860, Redington bought Green’s engraved copper plates and started reprinting toy theatre sheets to sell. Here began a mesmerising story of a family business which would be carried through to the next generation.

Eliza, John’s daughter enjoyed the routine of running his shop, but she saw it being unsettled in 1876, when her father passed away. Fortuitously a love story was about to alter her path and her fortune.

Act 2. Benjamin Pollock – ‘The last of the toy theatre makers’

Benjamin Pollock, who was a young and regular visitor to the shop, fell in love with Eliza and they became teenage sweethearts. Pollock had started his working life as a furrier, nearby the shop of John Redington. In 1877, the twenty year old Benjamin Pollock wed Eliza Redington.

He abandoned the fur trade and decided to invest in the toy theatre field, which was slowly deteriorating. Having an immense stock of John K. Green and Redington’s toy theatres sheets, Benjamin became a toy theatre fabricator. As a potential source of stimulus, the popular Britannia Theatre was located at 115/117, High Street, Hoxton – very close to the shop.

Utilising timeworn plates, Benjamin Pollock used to reprint the so called `juvenile drama’ sheets along with characters from fashionable plays. With all that material in his hands, Pollock transformed the imprint simply to `B. Pollock`. He converted these plates by erasing the name of `Redington’,  precisely as Redington had once removed the name ‘Green’.

He consequently turned out to be involved in preserving dramaturgical history. The reproductions coming out of his warehouse were the copperplate lithographs and designs of stage actors in their most famous roles. There were also reproductions of the backgrounds in miniature; all popular plays from several London theatres. His father in law had used hand-engraved copper plates to publish his pages. Pollock used the lithographic press which was more reasonable, however the perfect process of preparation of the stones was not easy. It required expertise and persistence.

Considering people’s interests were changing, the tiny Hoxton shop was hardly making any profit. Those were the days when magic lantern shows and gramophones were actually the hit of the moment. Those were puzzling times for the Pollock family. Even though it was a discouraging trade those days, Pollock created outstanding models from the old plates. He commissioned new projects from an artist called James Tofts and discarded the inscription selected by Redington. His dedication validated his skill and his capacity.

In 1884 the famous author Robert Louis Stevenson visited the little shop and wrote an article about it. “A penny plain, two pence coloured”. Stevenson immortalized the brand with his essay ‘If you love art, folly or the bright eyes of children, speed to Pollock’s. Distinguished visitors became part of the regular clientele. In fact it was William Webb (Pollock’s rival within the toy theatre industry) who inspired Stevenson’s article. Apparently there was a misunderstanding between the two gentlemen and Stevenson decided to approach Pollock instead. Until that event, Stevenson was seemingly a regular guest at Webb`s shop. 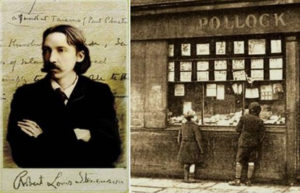 Pollock enjoyed quite a few years of accomplishments, but what seemed promising turned into a sequence of tragic events. Sadly his wife Eliza died in 1896, at 42, leaving Benjamin with 4 daughters (Eliza Louise, Mary, Selina and Susan) and four sons (Benjamin, Samuel, William and Walter). In the back room of the shop, Pollock kept printing the cut-out sheets and some of his daughters kept painting them.

In 1900, a tragedy marked the area of Hoxton when the Britannia theatre, once source of inspiration, was badly damaged by a fire. This was only announcing the next big loss in Pollock’s life. In 1918 his son William Pollock was killed in World War I. William was the one expected to succeed his father in the family business.

In the 1920`s Mr. Pollock’s could still experience waves of customers entering his tiny shop and In 1925, the British Puppet & Model Theatre Guild was founded. It contributed to keep the toy theatre alive between supporters. 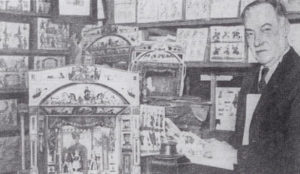 When Benjamin Pollock was 75 years old, he declared: “Toy theatres are too slow for the modern boy and girl. Even my own grandchildren aren’t interested. One Christmas, I didn’t sell a single stage. I still get a few elderly customers. Only the other day, a City gentleman drove up here in a car and bought a selection of plays. He said he had collected them as a boy. Practically all the stock has been here fifty years or so. There’s enough to last out my time, I reckon.” He could still speak fervently about special visitors like Charlie Chaplin and Ellen Terry.

In 1936, Mr. Pollock was unable to attend to his 80th birthday due to health issues. His eldest daughter Louise, was constantly in the shop to help her old father. Having become almost a myth in his own lifetime: ‘the last of the toy theatre makers’, he struggled to earn enough to cover the shop rent until his death the year later.