5th May is ‘Children’s Day’ (Kodomo no hi) in Japan. Originally a celebration for boys ‘Tango-no-sekku’ is celebrated by displaying dolls. The ‘May Dolls’ called Gogatsu Ningyo are made to wish good fortune and health on the boys.

In Japanese culture, it is often said that a human soul inhabits the body of a doll. Dolls and toys are often physical manifestations of the the wishes and teachings of its people in Japan.

Of course, here at Pollocks – we often imbue the toys with symbols, meanings and magic qualities.

The toy theatres are time travelling storytellers just as the Japanese street theatres Kamishabi – a hybrid of a travelling puppet theatre, toy theatre and animation were. Popular in the early 20th century eventually giving way to the electric kamishabi – television [“denki kamishabi”] and manga. 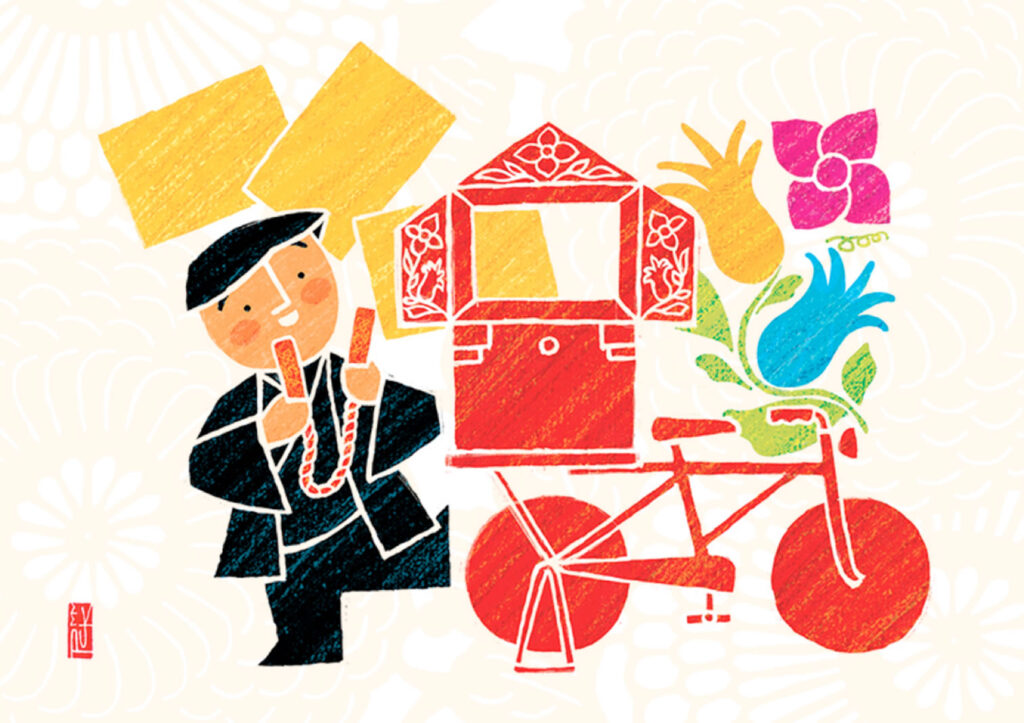 Proceeding the paper play of the kamishabi was the art of Tatebanko, paper dioramas to construct with a scene.. When we designed our shadow boxes, we looked at the 17th century woodblock prints that were popular up the 20th century. What is wonderful about the flat art is that it is just as beautiful as a print before the cutting starts to turn it into 3-D box scene. 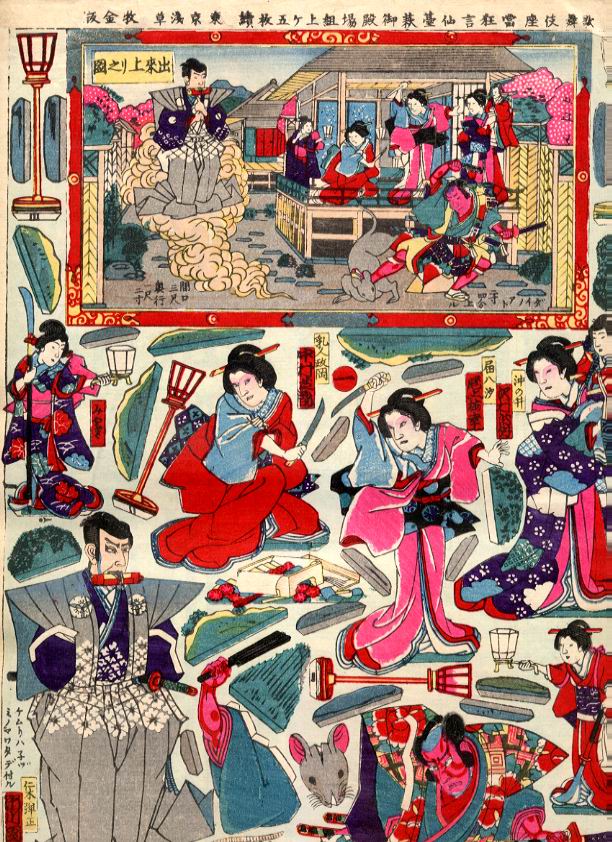 The tradition of the diorama has been taken into the digital age by the artist Tatsuya Tanaka – who uses the instagram square as the box for his miniature three dimensional scenes. Using everyday household objects or foods juxtaposing them with miniature model people like the ones seen in train sets, Tanuka recreates a daily scene with an adman’s eye. Somehow he manages to mix the ancient and high tech traditions in a poignant scene which reminds us of our place in the world. 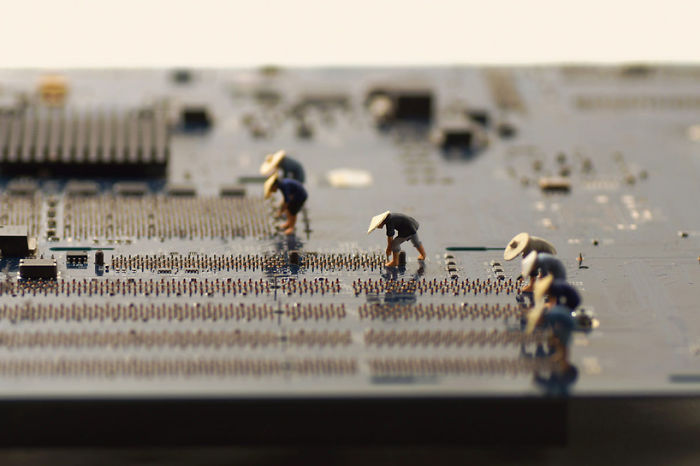 The spiritual significance of toys is something the craftspeople of Japan take seriously. In the Tōhoku region, wooden spinning tops and carved wooden toys called poppo are placed in the home as good luck charms. The otaka poppo is in the shape of a hawk (taka), a bird often associated with strength, prosperity and good fortune. The ancient technique of ‘ittobori’ literally means ‘one blade carving’ and lends itself to the wooden carved birds and with delicately carved feathers. 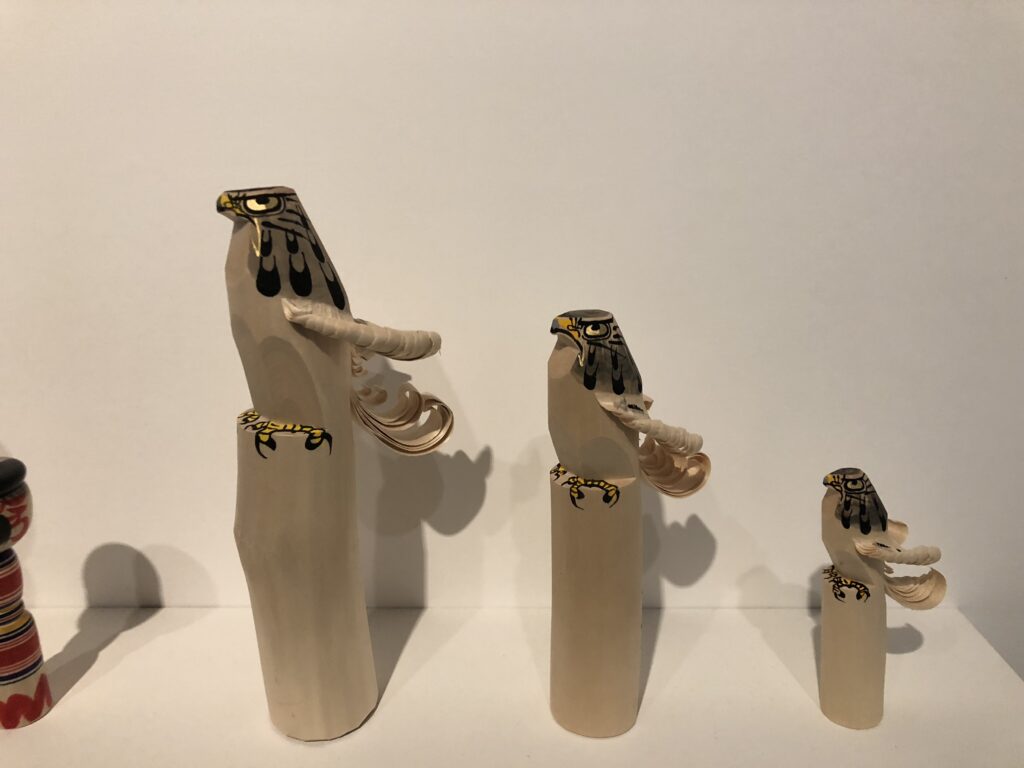 Kokeshi are wooden dolls that are hand turned on a lathe and then decorated with hand painted features. Whether they were simply designed as souvenirs of toys for children, many people believe they have the power to protect children and ward off evil. 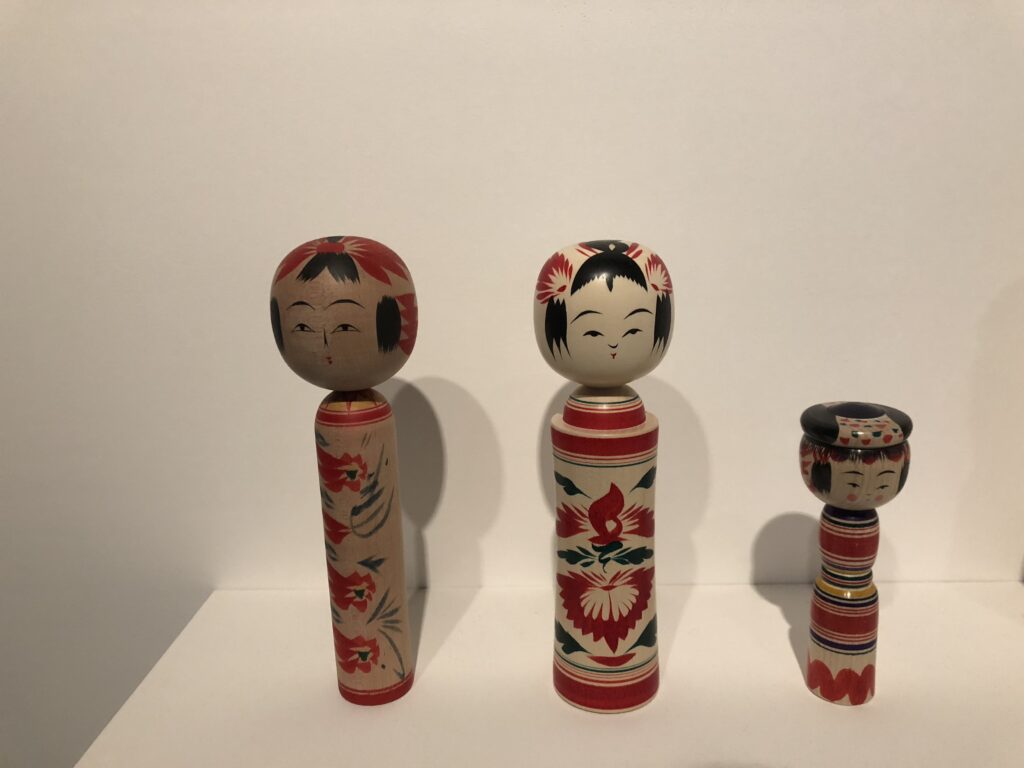 In the 2019 exhibition at Japan House London ‘Woodland Shade’, the age old crafts and folklore of the Tōhoku region of Northern Japan were explored using state-of-the-art technology. Rokuro is a lathe on which kokeshi dolls, spinning tops, wooden cars and daruma dolls are made. In the exhibition a digital installation allowed the visitor to become woodcarver and to play. 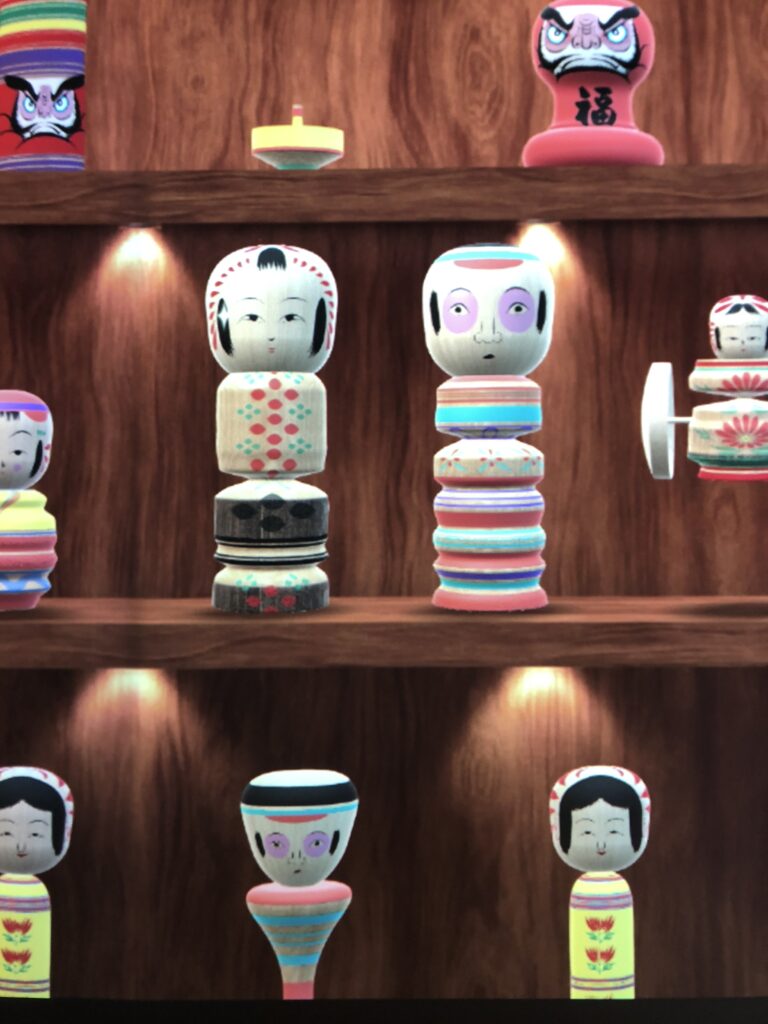 The instant gratification of fingertip screen woodcarving was fun but reminded me of a video I’d watched of 80 year old Masaaki Hiroi who had perfected his technique in making beautiful spinning tops. Hiroi wished to be 200 as the years had gone by so quickly and he still had millions of spinning tops to make in his head. 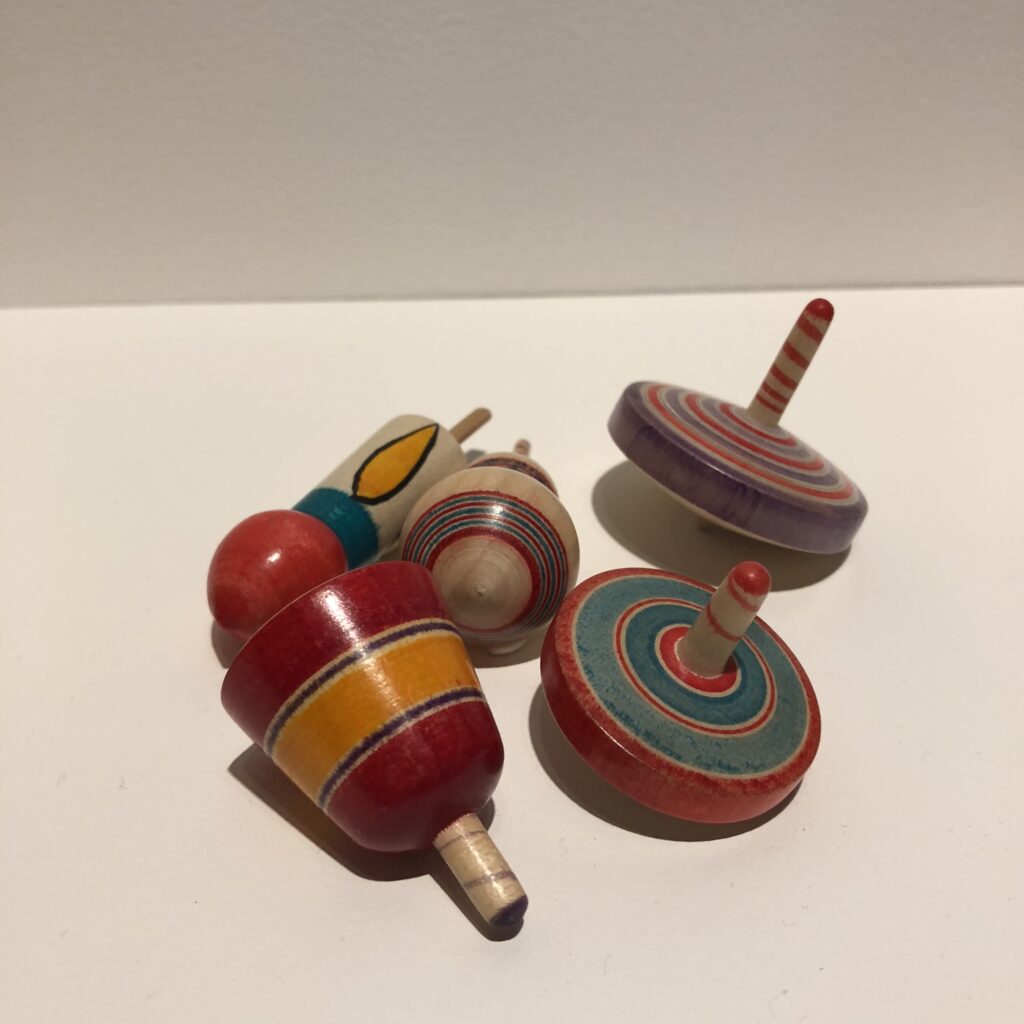 At the beginning of the 2020s as technology moves on a pace, many of us find comfort in the creation of a handmade toy, whether it by your own hand or another who has learned their craft passed down through a generation.

We hope this children’s day, a gift from Pollocks, whether it for a child or the child you were allows you to keep in touch with the youthful magic of play. 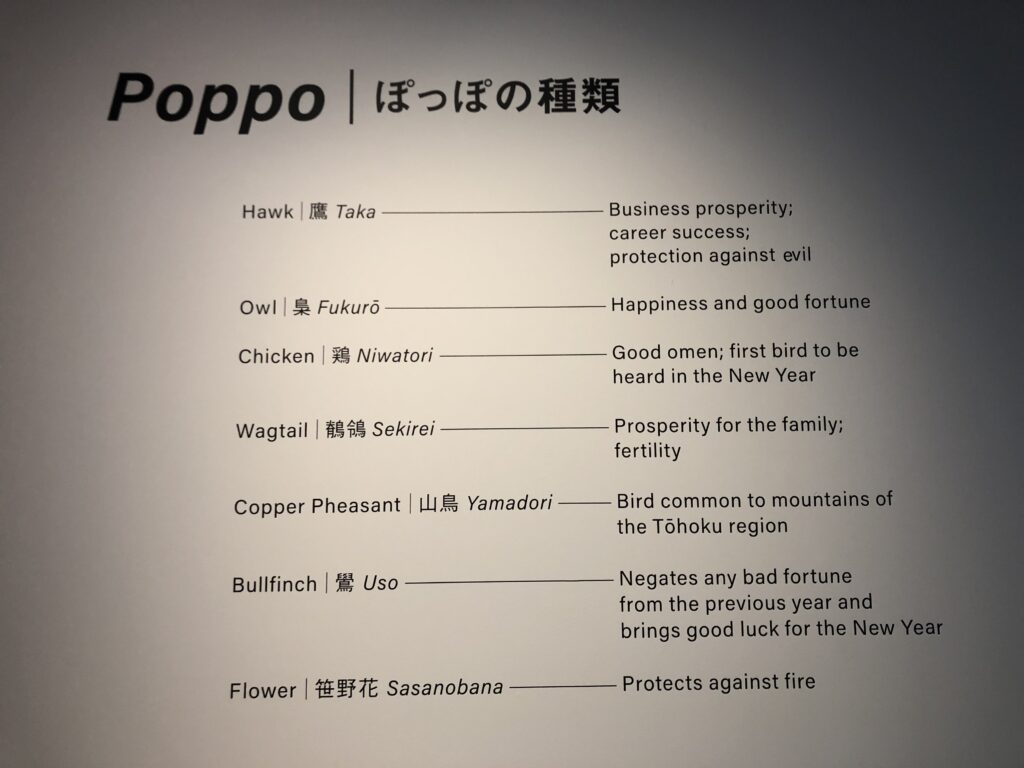