Memories of street games we played as children have left us with a lively nostalgia for certain toys. And memories of playtimes – often outside, often without an adult in sight – still feel to us the best possible forms of play for our children. A pocket-money toy and somewhere to skip, challenge a friend (or hide from them), or to chalk out a game, is all that was required. Adults are nostalgic about children not playing properly anymore. But of course, they do play, they like video games and mobile phone shenanigans. And anyone who has witnessed an MMO (massively multiplayer online game) being played will be able to testify to the social nature of it. Screams and groans are the least of it.

In our childhoods we played things differently. We had toys costing a pound or two, at the most. Sometimes they cost just pence. And we (somehow) inherited games to play with them. The sharp clack of swirly glass marbles against the kerb. Hoops making hips hula. Skipping ropes and rhymes and counting. Strings for weaving a cat’s cradle; to be unwoven in the next move. Pigtails bouncing as hops were chalked and then scotched. Yo-yos, up and down, up and down. And a ball thrown against the wall, satisfying and simple and hypnotic.

The long-lived street toy can still be purchased in special places – ‘shops’. Our own toy menagerie is full (we like to think) of interesting toys, sold with old-fashioned style, in the heart of Covent Garden. We do a cracking trade in paper toy theatres, so on trend for our area. And popular with children who will, some of them, (we know this) grow up and work in theatres themselves. But, for the child who wants play games, as we knew them, we also sell a special pocket money compendium: 4 toys, to be chosen from a tempting selection in an old haberdashery counter. They go into one bag, for £10. Some children take over half an hour to pick – and consult heavily with their grown-ups. Whilst others know exactly what they want, grab the bag and go off to play.

Our £10 goodie bags are available at our Covent Garden shop 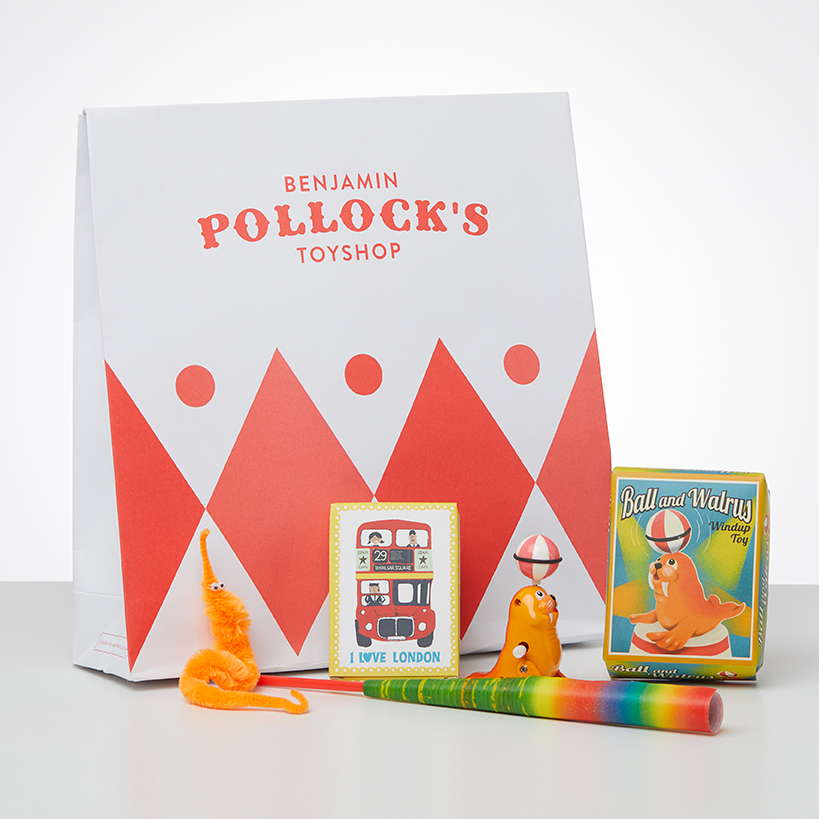