Lucinda Oakes is a decorative artist who learnt her craft from her father George Oakes. Following in the family tradition, Lucinda uses trompe l’oeil marbling inspired by rustic yet theatrical Italian churches and the technique of grisaille to bring a touch of magic realism to some of the most luxurious and grand houses around the world. 18th Century painting and the art of Rex Whistler inform her original design of the working title of the ‘Decorator’s Theatre’. Persuaded by Imogen Taylor, once one of the principal decorators at Colefax and Fowler and the ‘crown princess of the English country house style’ to take up a commission to design a theatre for Benjamin Pollock’s Toyshop, we are delighted to work with Lucinda on a luxury decorative paper theatre as well as a window display in Covent Garden. 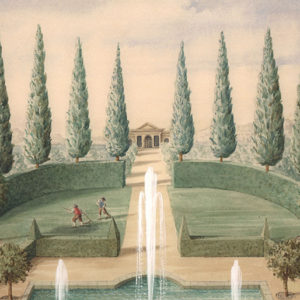 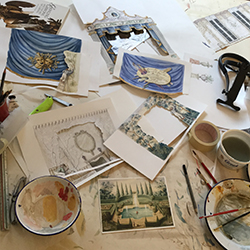