From childhood influences to a stellar career designing for the theatre, Christopher discusses how he has come full circle. Creating imaginary worlds as a kid dreaming of Star Wars to creating the fantasy fairytale on stage for Disney’s Frozen, the Musical.

His acclaimed work on the play Peter & Alice by John Logan – a fictitious encounter based on the literary characters namesakes meeting in Bumpus Bookshop uses the device of a toy theatre proscenium to transport the audience into Neverland.

Costumes, lighting, sets. Christopher explains how ‘you cheat to tell the truth on stage’ as a theatre designer and Simon learns about whether you can reinvent the wheel when it comes to designing one of the most anticipated UK theatrical openings this decade. Frozen the Musical opens at the Drury Lane Theatre, Covent Garden in October 2020. 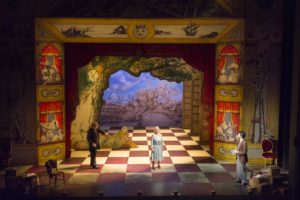